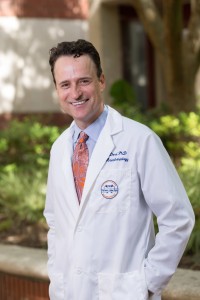 The goal of the team effort directed by Sylvain is to discover new effective mechanisms that limit neuronal dysfunction associated with ischemic and hemorrhagic Stroke (IS, ICH, SAH), traumatic brain injury (TBI), Alzheimer disease (AD), aging, and various other neurological disorders. TThe overall objective is to slow down the progression of the disease, and ultimately stop it. To do so, the aim is to limit cell death resulting from either acute and/or chronic neurodegenerative conditions, re-establish normal cerebral blood flow, limit inflammation, and restore regular cellular functions. Using a variety of in vitro and in vivo protocols, using preclinical and human specimens, several new hypotheses and potential therapies are being investigated and developed:One objective is focused on understanding the unique properties of hemoglobin, heme and iron in the brain using cellular/molecular techniques and various models of stroke, traumatic brain injury/concussion, Alzheimer disease, and aging. New knowledge is gained specifically by investigating the action and the role of activity of the heme oxygenase enzyme and its unique bioactive metabolites, namely, carbon monoxide, iron, biliverdin, and bilirubin. This work is supported in part by NIH/NINDS

Volunteers are being accepted for conducting research in Dr. Sylvain Doré’s lab. The team focuses on investigating novel treatments of neurological disorders. Specifically, current projects involve the utilization of various preclinical models to uncover the neurobiological processes of ischemic and hemorrhagic strokes, and those associated with Aging and vascular cognitive impairments. The lab is interested in inflammation, antioxidants and natural products. Volunteers will have the opportunity to learn about the rigorous process of scientific inquiry and gain hands-on experience conducting experiments (for example, PCR-genotyping, perfusion, brain harvesting, slicing, staining, and quantification/analysis, etc.). Those interested will be asked to commit an average of 3 X 5h-block/week; additionally, summer “internship” is encouraged. Please email us if you are interested in volunteering or would like more information about this exciting opportunity.